The reunion that wasn't! 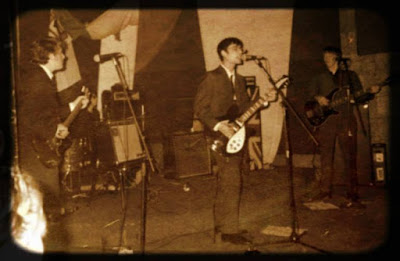 I was on the 6th Avenue bus, riding towards downtown, and I noticed a sign there announcing a reunion gig of The Pace over at Jazzbones. I wondered What the hell...???, as I hurriedly got off the bus and walked into the place just as the other guys were setting up to play, but they looked like they'd rather be anywhere but there. I was thinking to myself, "Nobody told me anything about this!" as I made my way onto the stage, and sat down at a set of Roland V-Drums that were up there.

Before I knew it, we were playing away at some of the old songs we used to do, and after about three songs, it was quiet, the stage seemed to be empty of anyone else, and there was hardly anyone left in the crowd.

I left the stage, walked around to the back of the place, and saw that there were only about six people there. The atmosphere of the place was very sullen and glum for some odd reason. A couple came in, smiling and talking, but stopped as soon as they noticed the rather dour atmosphere.

Then, the other guys were back on stage and had started up again, playing "Magic Bus" (I quickly thought, "We never played this one!"), and the original Pace drummer Josh Kilpatrick had joined them, but was not playing the drums for some odd reason, just singing backups with Lincoln.

I got up on stage again, got behind the drums (which had now been replaced with white plastic buckets arranged like a drumset for some reason), and began plowing away on them, but it all went quiet yet again.

Next thing I know, the guys had put down their guitars and were sitting on some chairs just off to the side of the stage area, grumbling and growling about "We should have done this back in 2016!". I was just about to add my two cents that I was sort of having fun, but then that's when the alarm went off.

I have to admit, the dream actually put me in a not-so-great mood for the day, but as soon as I got home from work and wrote it all down on Facebook, I realized how weird and hilarious it sounded in retrospect. And not only was it realistic for a dream that didn't last about ten minutes, but it almost seemed the exact way that it probably would have happened in real life!